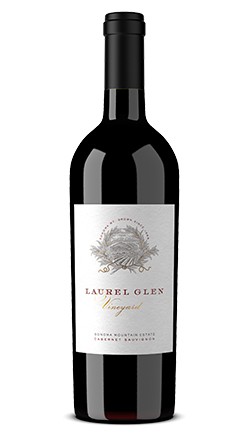 94 Points - Wine & Spirits Magazine: "This is formal, almost austere cabernet, with the same deep, black tannins that you find in many of the great 2013's from the Napa Valley, just presented in a slightly cooler tone. At first, there's a pretty, foresty scent and an impression of dark mineral structure dammed up behind a layer of French oak. Give it a day of air, and its savory flavors explode, saturating the senses with smoky, woodsy spice that feels connected to the rocky volcanic soil and forests of Sonoma Mountain rather than oak barrels. It's massive yet refreshing, with floral details in the end - a wine to keep in the cellar for at least a decade."

Tasting Notes: “Beautiful purple inky color, with clean raspberry and cassis nose. A little sweet ripeness on the attack and medium bodied flavor that leaves a soft lush finish that lingers just long enough. Tannins are smooth and polished, ready to drink now, or hold for a good number
of years.”

Vintage Notes: The 2013 Laurel Glen Vineyard Estate Cabernet Sauvignon is a beautiful illustration of the years of work we’ve put into elevating practices in the vineyard and winery. A mild winter led to an early bud break followed by ideal weather. Even though picking began about ten days earlier than in 2012, on September 25th, the early early bud break left plenty of time for flavor development. Yields at Laurel Glen Vineyard were lighter than average at about 2.4 tons per acre, but the quality of the fruit was exceptional. Justly lauded, the 2013 vintage yielded grapes with intense concentration and beautiful aromatics.

Vineyard Notes: Viticulturist Phil Coturri led our transition to organic farming beginning in 2011. In addition to developing a comprehensive schedule of cover crops, he updated the vineyard’s trellising system, pruning practices and began dramatically limiting irrigation. The 2013 growing season was the first time we had irrigated any part of the vineyard since 2010: we watered one block once. In the winery, winemaker Randall Watkins modified how the grapes were handled at harvest, implementing cluster and berry sorting to increase opulence and polish. The changes we’ve made to farming and winemaking have made a noticeable difference to wine quality and the health of the vineyard.