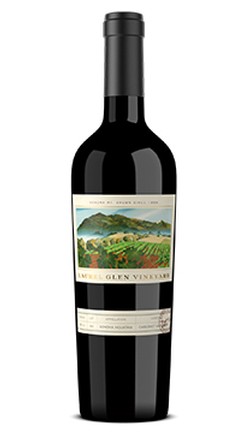 The Lot Series is an homage to the Laurel Glen Vineyard Cabernets of the 1990’s, a time when California stopped trying to imitate Bordeaux and concentrated on developing a unique personality. Each year we pick the six or so barrels with the most rugged and rustic personality to become this wine.

Tasting Notes: "Medium to deep garnet-purple colored, the 2014 Cabernet Sauvignon Lot 46 has a seriously intense, wonderfully earthy nose of tilled soil, mossy bark, truffles and iron ore over a core of sweaty leather, smoked meats, black olives, crème de cassis and preserved plums. Medium to full-bodied, the palate has a very firm frame of chewy tannins and lively acid with tons of earthy layers and a long, grippy finish. The style is a bit rustic, but it has bags of personality." - Lisa Parotti-Brown, MW

Vintage Notes: A warm winter and spring in 2014 caused early bud break, followed by beautiful mild weather in summer that allowed for long, even ripening and excellent flavor development. Picking started on September 17 and ended on the 23rd, the earliest Cabernet Sauvignon harvest our winemaker Randall has seen in his 20 plus years of winemaking! Despite drought conditions and a 6.0 magnitude earthquake on August 24, the quality of fruit was excellent.

Vineyard Notes: Laurel Glen Vineyard faces east, above the fog line. This optimal exposure captures the first rays of morning sunlight and avoids the burning heat of late afternoon. The thin, rocky soils promote efficient drainage and restrain vigor. The vineyard earned CCOF Organic Certification in 2014, thanks to the efforts of Viticulturist Phil Coturri. In addition to developing a comprehensive schedule of cover crops, he has updated the vineyard’s trellising system and pruning practices to achieve more even ripening and better concentration in the grapes.